Today was a day for doing my early season BTO (ttv's) surveys of East Yell. I had three areas to cover, and got soaked in the process. The sun was out and the birds were singing, but every now and then the heavens opened and it rained in monsoon proportions... This work was rewarded by a singing Male Wheatear, my 'first' for the year, Not a hope of a photo though as it was obviously charged up with hormones, and was zipping about all over the place. Also seen during my surveys were 2 Pheasants calling. This ain't something you hear very often in Shetland, as only a few survive being released! These birds at Aywick have been around for many years and I've seen them occasionally, but this is the first I've heard displaying in Shetland! 3 Chaffinch were the only other birds of note (2 at Aywick, and my singing Burravoe bird) 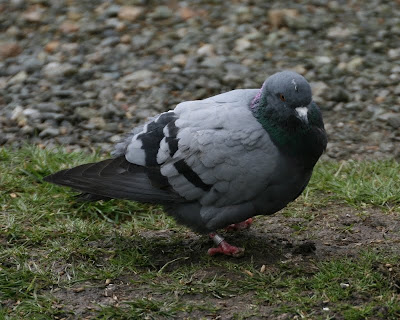 When trying to take photos of the local Rock Doves, I noticed one individual had a ring on it's right leg. So I zoomed in and tried to capture as much of the ring info as I could. This resulted in me noticing the terrible state of the birds feet. Most of the toes were missing or gnarled, but the bird still walked as normal. I believe this can be caused by a mite infestation, and is obviously not caused by the metal ring. An investigation into the origins of this bird is underway, as it's number looks readable in the many photos taken (ES 58139).

I also downloaded some Rock Pipit photos I took yesterday, which included another very Grey looking bird. This bird had an extensive grey colour to most of it's upperparts, and flanks, but lacked the stonking White 'super' of the previous bird. Click the link to see the original bird http://burravoebirding.blogspot.com/2010/03/petrosusor-is-it_30.html). Yet again there is just a hint of Pinkish colour to the lower throat. The colours in the photo below have not been altered. 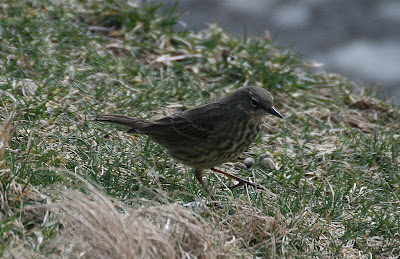