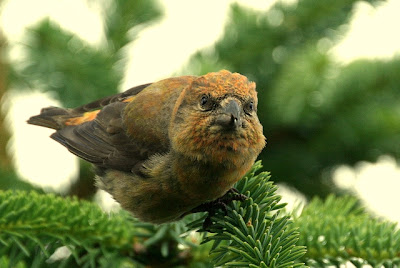 The above Crossbill is either a... 'Common'... '4E'... or... 'Glip' depending how much you want to get into this subject!
Sound recording the various 'vocal' types of Crossbill has become a bit of a passion for me. The 'science' is still a bit of a work in progress, especially for me anyway. I've recorded pretty much every Crossbill in Shetland that I could since the 2009 invasion (hundreds of recordings in total!), and as such it looks like I've managed to add the 'Parakeet' type to the Shetland list! (The Only vocal types recorded here previously were the 'Glip' and the 'Wandering'). I've also been to Speyside on the odd occasion and collected recordings from the Scot's Pine woods although not with much success so far, but that's only a good excuse to go back and try again!

Below are a few sonograms of the various types,  The classification I've used here is based on the 'Sound Approach', although many different classifications exist.  These sonograms will be added to as I manage to obtain more recordings.  Please feel free to email me if you would like to discuss anything seen here.

The above recording, which is just one of many similar taken in the New Forrest (July 2010), also remains unclassified under the 'Sound Approach', and the best info that I've managed to gather, is that it's a form of Fc1 (Common Crossbill).  There are similarity's to Parrot Crossbill in shape and frequency, although 'Parrot' should be even lower in kHz...  Thus it's been called a 'Parroty' Fc1 by some authority's.  (As with most things Crossbill related, I'm grateful to LC for his help.)

Below is a recording of '4E' Common Crossbill recorded in Shetland on 8th Aug 2010.  (with Siskin and Curlew also)