After dropping my wife in Lerwick this morning, I decided to kill a few hours by trying to find a few birds in the South Mainland.

The weather was truly awful, and heavy rain and mist tried to spoil my best efforts. I still managed a few goodies, though not as good as the three lads on Unst (who found another 'rare' in the form of an Arctic Warbler today!)

2 Green Sandpipers were the best I could manage today. These were on the small pool at Garthsness. Also seen today were 1 Summer plumage Sanderling, 3 Shoveler and 9 Willow Warblers. These were all at various points between Lerwick and Sumburgh, and along with Garry Bell's Wood Warbler at Sumburgh Head that was about it. The fog at Sumburgh Head was awesome, and the pic below of the Wood Warbler shows just how bad it was! 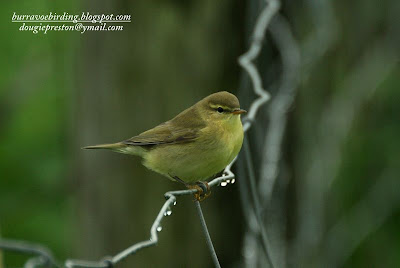 Wood Warbler (in the mist); 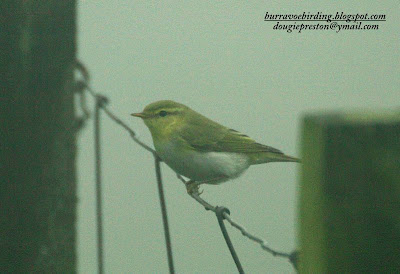