Got dragged kicking and screaming to Lerwick today for my wife to go shopping!....... shopping...... BLOODY SHOPPING!!! She has obviously forgotten it's October, with Easterly winds, and anything can and will turn up in Shetland at this time of year. So as punishment for this 'crime', I decided to drag her off to twitch a few of the goodies that were hanging on doon Sooth.
First up was the Pallas's Warbler at Sumburgh Farm. A great little bird found hopping along a stone wall. While photographing this wee gem, I also heard a Richard's Pipit fly over! It was only 5 min later that I spotted it landing in the next field and managed a distant view of it sitting in the grass, before taking off again and flew North over the Hotel while calling all the time.... Nice!
Pallas's Warbler; 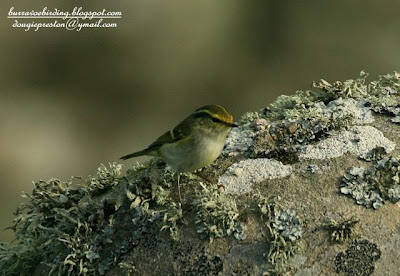 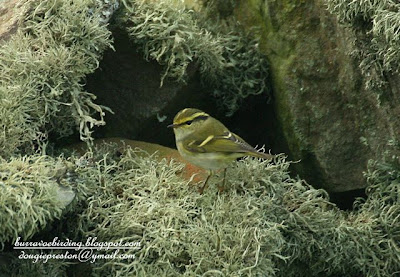 As my wife didn't seem too pissed off at this outing. Next up was the Dusky Warbler at Quendale. This bird was a total pain in the arse as it only showed on the deck for a few seconds, but it did call, and it did fly a lot.... a hell of a lot! No pics of the Dusky, as it just wouldn't cooperate, but the Red-breasted Fly at the rifle range did pose... 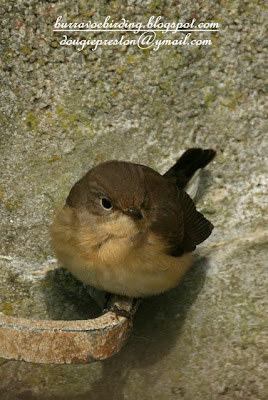 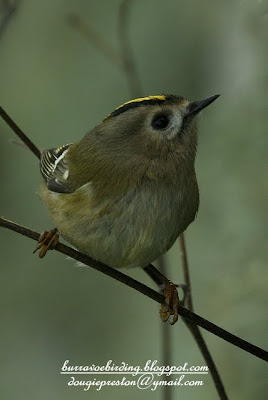 Dunlin with a very long bill; 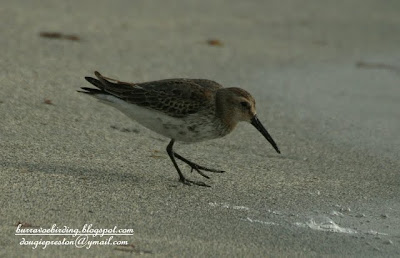 The one that got away?... On leaving Quendale I had brief views of a Tree Pipit which landed on the path for a couple of seconds before flying off into the bushes. Only a couple of hours later a Olive-backed Pipit was reported at the same place! On 'my' quick views it did just look like a Tree Pipit to me, with not enough colour in the mantle, but a good strong head pattern. Oh well, shit happens....

Two Peregrine were also good to see today. One carrying prey at Sumburgh Airport, and the other at Dales Voe being mobbed by the local 'Hoodies'
Posted by Dougie Preston at 18:03