Hearing the news that a Black Stork was found on Unst, just when on your way to night shift, is never going to make for an easy night, especially when you have already dipped on this species in Shetland only a couple of years before (rare as hen's teeth up here!)
So after a frantic wait, I was finally on my way to Unst, straight from work! A good look around for the whole morning proved useless, so at midday I cut my losses and headed home to bed. Only to be woken after less than an hour by RT calling to tell me the bird had reappeared back where we had been earlier, but had since been flushed....bollocks!
So a very weary Dougie drove at speed back to Unst, and on arrival was meet by many happy faces which were watching the bird at distance. After a good look, and chat to the finders and others, I was off back to work again. (Is there a limit to the amount of caffeine you can have before it causes side effects?... I'll let you know! ), a very nice Shetland bird was added to my list...AT LAST! A lot of stress, but well worth the effort! 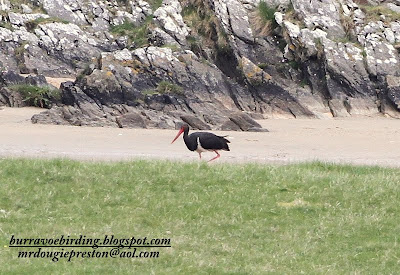 Cheers to the following people; The two brothers Stef and Ash for finding this gem, and Jim and Jase for the use of their cameras and lenses (I did use my card, and it was my finger on the shutter button though! so I'm claiming the pics as mine!), as my setup was just not up to the task at such long range! and of course Rory who kept me up to date on the sightings.
Posted by Dougie Preston at 19:58